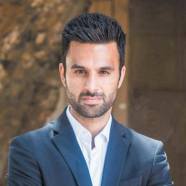 Born in Haifa, second son of four children, moved with his family to Nazareth.

At 18, he decided to volunteer in the Israeli army..

He was accepted to the Golani bridgade where he served and completed a commander’s course receiving an award for excellence, after which he was placed in battalion 51.

In 2006, as he was nearing the end of his service in the IDF, the Second Lebanon War broke out. During the course of the fighting he lost 3 commanders, seven friends and a soldier under his  command. At a battle in Bint J’bil, four days before a ceasefire was established, a Kornet missile shot at his forces hit a wall near him and exploded. The impact was so strong that he was severely injured; he lost his leg and had multiple wounds all over his body and face.

Rehabilitation was a long process that took about a year. Dedicated treatment, much faith and determination helped Yoseph recuperate and overcome the injuries. Joseph’s leg was reattached in the process and today he can even play soccer once again!

On account of this fateful experience, the injury that he suffered and the rehabilitation process, Yoseph decided to dedicate his life to showcasing the beautiful sides of the State of Israel and the true situation of Israeli-Arabs. He speaks before many audiences, especially students, and he disputes and fights organizations that boycott Israel.

Since he felt that while he was out of the country defending Israel, at home Arab Israeli society was facing a crisis of its own and was not integrating into mainstream Israeli society, he decided to take it upon himself to dedicate his time and efforts to work on this as well. He established, Vouch for Each Other to that end. His aim is be the catalyst of  change, bridging between the Arab sector of Israeli society with Israeli society as whole.

After leading soldiers on the battlefield, led hundreds of workers from all sectors in the field of market research, now he heads the organization to lead it towards the target, to bring about the desired change for Arab society and to the state of Israel.

Yoseph is a  B.A. in political science and holds managerial experience in various positions, among others, as project manager and operations manager at the market research company. He also serves as a strategy consultant for buisinesses and companies.

Most Viewed Posts and Pages: